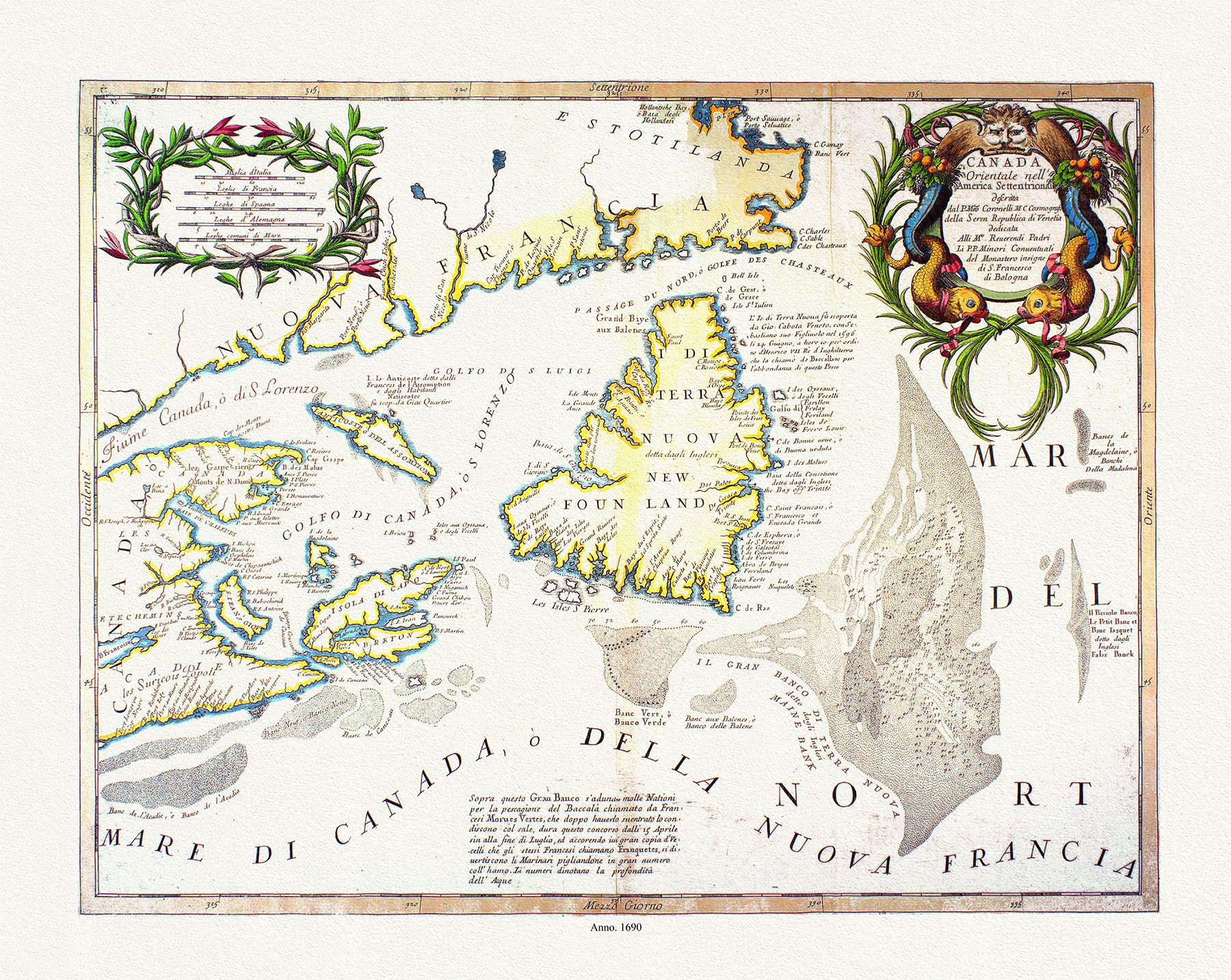 A detailed map of the Newfoundland, Labrador, Nova Scotia and the Gulf of St. Lawrence, by Vincenzo Maria Coronelli.

The map comes from Coronelli's rare Atlante Veneto, one of the most decorative and ornate of all 17th Century Atlases. It exhibits the fine engraving style of that coveted Venetian atlas. It was originally billed as a continuation of Blaeu's Atlas Maior.

Coronelli derived his information from that of Nolin, who had published a similar map in Paris ten years earlier.

The fish surrounding the cartouche are an obvious allusion to the main industry of the region.

Coronelli's mapping includes an elaborate depiction of the Grand Bank with numerous soundings and differentiated stippling to indicate various elevations. It is unusual to see underwater topography render at such high definition.

Coronelli dedicates his work to the Franciscan priest Padri Minori in Bologna. Coronelli was himself a Franciscan monk who eventually rose to become head of the order.

Vincenzo Maria Coronelli (1650-1718) was possibly the best Italian mapmaker of his time. He made globes, including one 5 meters in diameter for Louis XIV. While his most important work was completed in the last quarter of the 18th century, or shortly thereafter, he cast a long shadow for decades to come.


This map has been carefully restored and recreated onto a heavy 100% cotton canvas and not a fragile paper. My maps can be easily rolled to be presented as a gift or retrieved from storage to reveal a fascinating conversation piece.

Your item has a durable protective coating which would allow it to be framed without heavy, glaring glass.

Frame it yourself! Not all that hard to do. A rustic looking frame will enhance its appearance or just use the 4 map pins, provided at no charge, to tack to your wall!

Are you looking for a specific locale? We have Everywhere! Just send us your inquiry.

Desire a different size? Send us your requirements. We can select a print for you that fits perfectly into an old frame you might have in your attic or garage!

All unit measurements are approximate, most usually 22x27".

I gladly accept returns and exchanges

Ship items back to me within: 30 days of delivery

But please contact me if you have any problems with your order.

The following items can't be returned or exchanged

Because of the nature of these items, unless they arrive damaged or defective, I can't accept returns for:

0 items in your cart