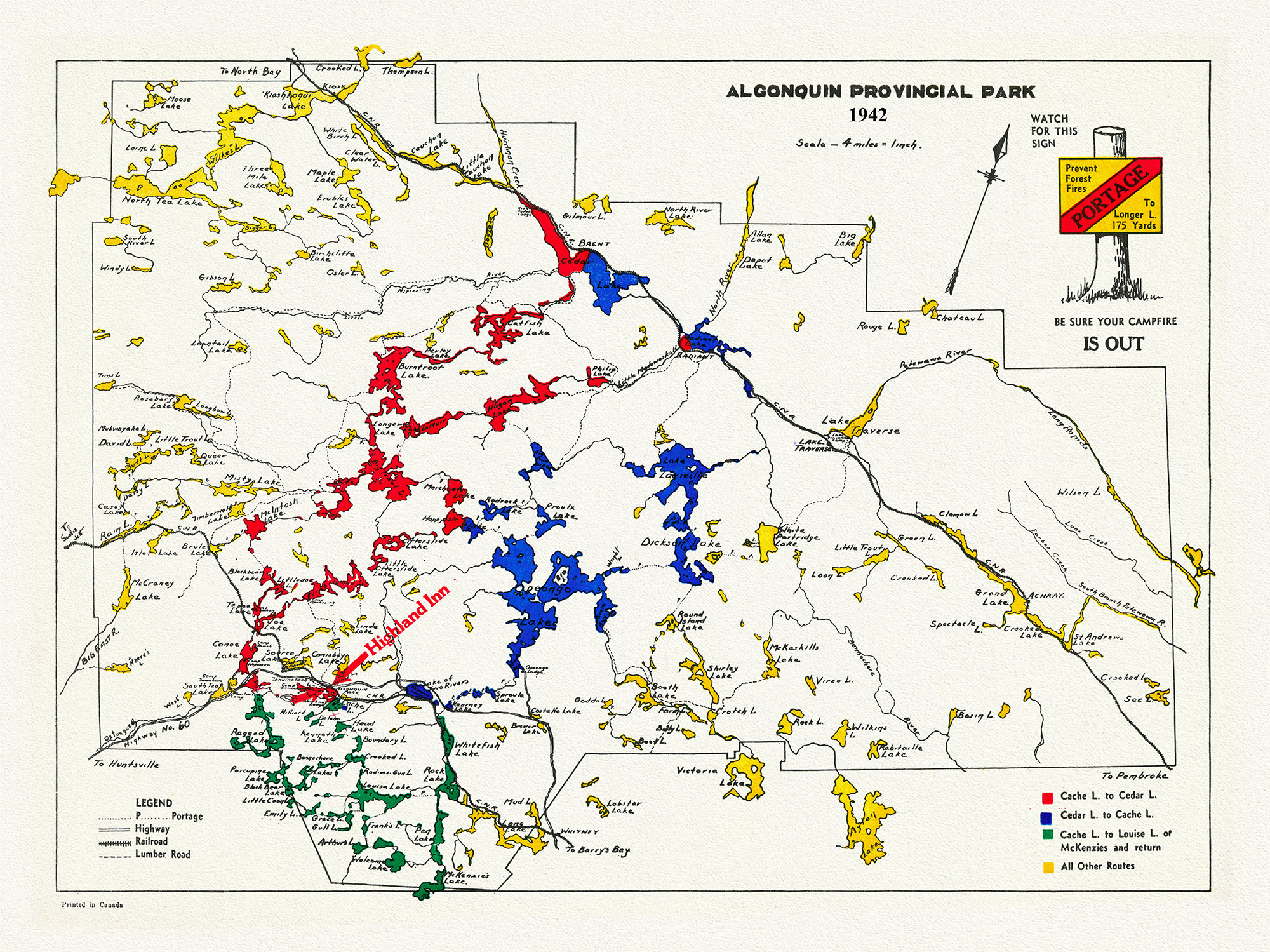 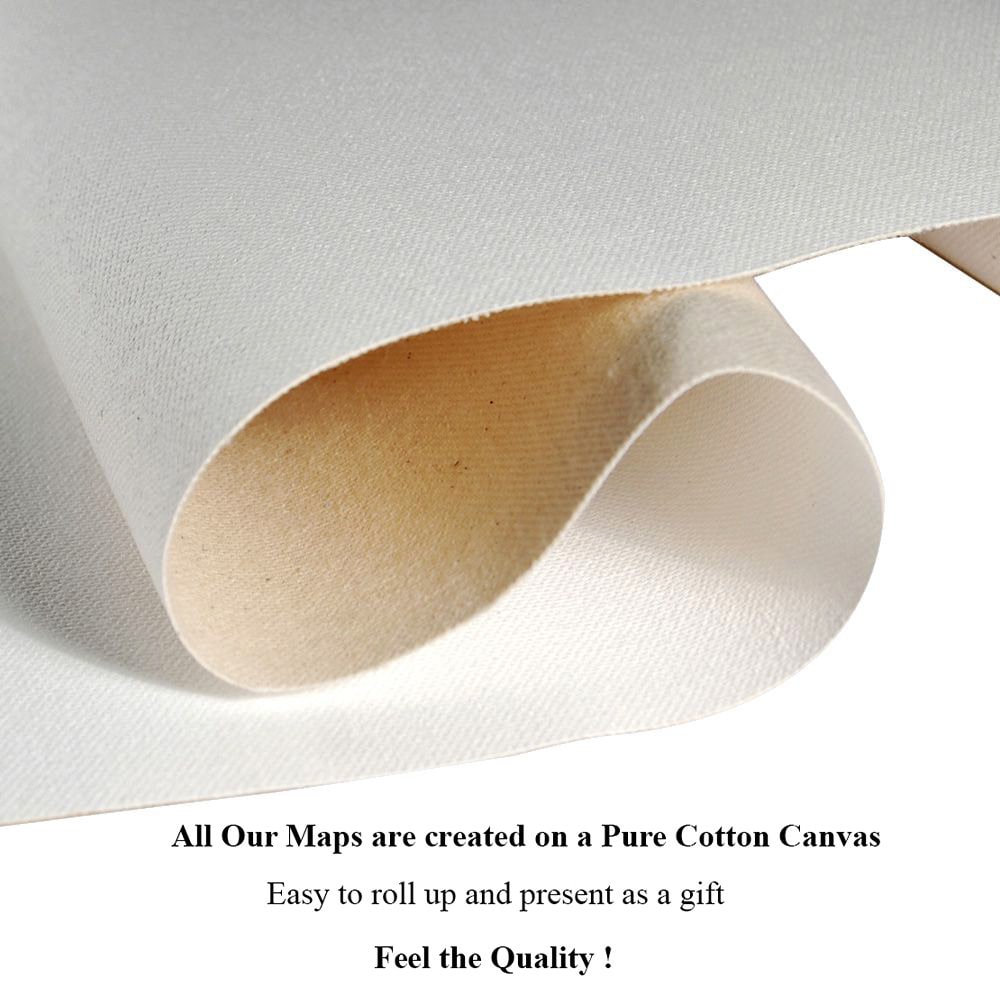 The Highland Inn (1908–1957) was a year-round resort hotel built and operated by the Grand Trunk Railway (GTR), in Ontario’s Algonquin Provincial Park. It was located near the park offices on the northern edge of Cache Lake, and was a focal point for the park for many years. Wishing to return the park lands to a more natural state, the Inn was purchased by the Ontario Government in 1956 and removed. Today all that remains are traces of the concrete stairs and platform that met the CNR line, which was lifted after departure of the last train in 1959.

Algonquin Park was established in 1893 as a nature preserve and recreational playground. The railway through the southern and western portions of the park had been built in the 1890s by the Ottawa, Arnprior and Parry Sound Railway (OA&PS), opened for traffic in 1897, and was purchased by the GTR in 1905. Changes to the administration policies of the park since 1893 permitted short-term leases for the construction and the operation of hotels and summer camps to make the park more attractive to tourists.

By 1908, the GTR had become well established in Muskoka, southwest of Algonquin Park, as a resort area which the railway promoted as the "Highlands of Ontario." That year, the Grand Trunk Railway opened its first tourist lodge, the Highland Inn, which was an immediate success.

Located at the Algonquin Park station, near the park headquarters, the Inn was a simple two-story structure with a covered verandah across the front of its main floor, which overlooked Cache Lake. A staircase led from the station platform to the main entrance at the center of the building; there was also an inclined path leading up from the station. In its first years of operation, the hotel proved so popular that land on the west side of Highland Inn was cleared and raised wooden platforms erected, on which tents (supplied by the hotel), were put up to meet the requirements of the rapidly growing tourist trade.


This map has been carefully restored and recreated onto a heavy 100% cotton canvas and not a fragile paper. My maps can be easily rolled to be presented as a gift or retrieved from storage to be unrolled to reveal a fascinating historical conversation piece. Search your family history and geneology.

The map appearance I am trying to achieve is that of a map that has been bound in an atlas that has been lovingly cared for over the last 100+ years, with the original hand coloring. On certain monitors and smart phones, colors may look excessively bright because your screen is lit from behind. I can assure you that the colors will not be so garish when you receive your map. Instead you will be appreciative of the heft and quality of the highly textured canvas, which can sustain a certain amount of rolling up and abuse. These were designed to be heirlooms.

Your item has a durable protective coating which would allow it to be framed without heavy, glaring glass. Feel free to touch it!

Frame it yourself! Not all that hard to do. A rustic looking frame will enhance its appearance or just use the 4 map pins, provided at no charge, to tack to your wall or message board.

Are you looking for a specific locale? We have Everywhere! Just send us your inquiry.

Desire a different size? Send us your requirements. We can select a print for you that fits perfectly into an old frame you might have in your attic or garage!

Included free with your map purchase are 4 small map pins to allow your item to be pinned to your drywall or bulletin board.

All unit measurements are approximate, most usually 20 x 25-30".

I gladly accept returns and exchanges

Ship items back to me within: 30 days of delivery

But please contact me if you have any problems with your order.

The following items can't be returned or exchanged

Because of the nature of these items, unless they arrive damaged or defective, I can't accept returns for:

Beautiful map. Very pleased with this purchase. Definitely measure your piece before buying a frame.

0 items in your cart